It is simply amazing how local business in Station North can use the space that they have been give or have can used it in their own way. The local business OutTakes Cafe is a small local ice cream parlor. When I walked in it didn't feel like a ice cream parlor but more like a small coffee house but that didn't necessarily sell coffee. This small business had a friendly environment and the business owner was really nice to us. What I specially liked about this small parlor was the aesthetics of the place. It had bright colors which made it feel like home but the one thing that caught my eye was the art work that was hanging on the wall. The artwork is all created by local people living in that area which gave it a personal touch. 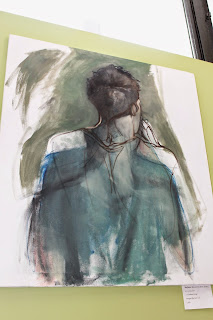 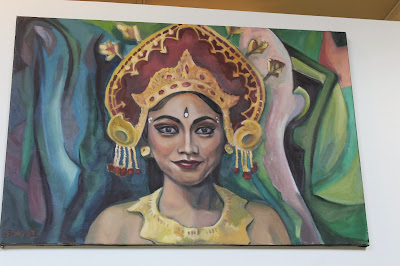 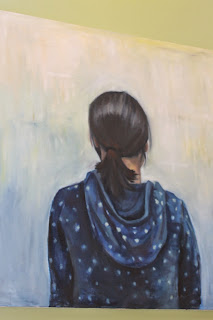 Posted by Unknown at 6:57 PM No comments:

On April 17th a couple of american studies students Marissa, Scott, Reeny and I braved public transportation together and went into the city. We all met up at UMBC and took UMBC transit to go into Baltimore City. We all got off at Lexington Market and walked to a common location where the charm circulatory would take us to Penn Station where the Station North begins. We knew that we needed to take the purple line to get to Station North. From there we all decided that we were hungry, and decided to stop at Joe Squared and try their pizza. It was nice to just sit on a Friday evening and just enjoy some pizza and talk about our class.It was interesting to just sit there and see different people walking by and mean to see the differences in the kind of people that enjoy the things that Station North has to offer vs. the people that just walk by because they can't afford the businesses around them. 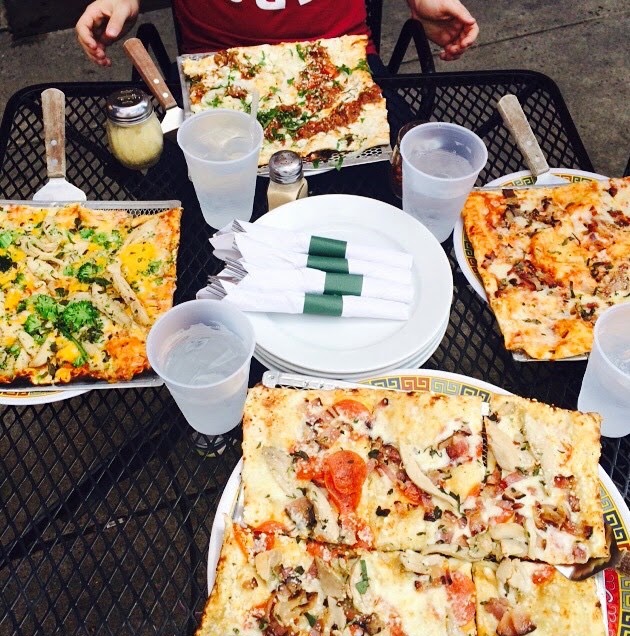 Posted by Unknown at 5:48 PM No comments:

TIMELINE:
1914: The spot where Chicken Box is now located was a drug store surrounded by several rowhouses within the area
1940: Building was most likely a bar due to the “bar” sign on the building
1952: The bar was gone and had been replaced with something adjacent to the Parkway Theatre
Between 1940-2008: The building then become known as White Tower which was a diner restaurant/ fast food place which was a spin off from White Castle. The building later became known as New York Fried Chicken
Recent History
2008: The City of Baltimore used eminent domain to obtain the building for economic development purposes. The owners of New York Fried Chicken were given funds in 2008 so that they could purchase a building elsewhere in Baltimore where they could continue their operation
2012: Station North Arts & Entertainment officials began to discuss with the city to use the space temporarily while Maryland Firm Festival and their partners began to raise money in order to renovate the building along with the adjacent Parkway Theatre
2013: SNAE moved its offices to the ground level storefront located at the corner of North Avenue and Charles Street. This added a much needed usable performance and gallery space to Station North.

The Story of Chicken Box
At the corner of North Avenue and Charles Street, sits SNAE home base. The SNEA home base is a performance space along with gallery space that has added to the vibrancy to the area of Station North. While the history of the area that is now known as Chicken Box has been hard to track down there is still some colorful history surrounding the area. Some of which might help explain why the SNEA home base still has the word “chicken” has its main header.

In 1914 the spot that now hosts the Chicken Box is listed on a Sanborn (fire and insurance) map as a drug store. From looking at a map, one can tell that the drug store was built specifically to serve the locals living in the rowhomes in the surrounding area. In the 1940s, the building has a sign designating it as a bar. In 1952, the building had changed hands again. According to a map of the city around that time has the location listed as a restaurant adjacent to the Parkway Theatre. 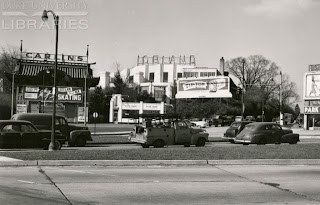 In 2008, the city of Baltimore wanted to attain the space for development purposes. The city gave New York Fried Chicken money in order to relocate somewhere in east Baltimore where they could continue their operation. In 2012 Station North representatives began to discuss using the space with the city while other partners began doing fundraising in order to bring money in. Officials used Kickstar in order to raise $10,000 in order to renovate the space in order to tailor it for into office, theater, & gallery space. In spring 2013, SNEA moved its home base. The exhibitions in this space have brought many people to the storefront and as a result has helped increased activity along Charles Street and North Avenue business owners.  The local Annex Theater also shares the space with SNAE.

The Chicken Box has been an important business on the corner of North and Charles for over a century, and, as part of the Parkway Theater rehabilitation it holds the promise of a revitalized future for the area.
Posted by Unknown at 1:38 PM No comments:

Week of May 4th

This past week in class we as a class have come more together to make sure that our projects for Station North are complete. On Tuesday we split up in our respective groups and went over the transcriptions that we have for the rest of the recordings. We also prepared ourselves for Marc Steiner to come in to class and listen to pieces that Dan and Adam had been working on. On Thursday Marc came in and listened to the recordings we had. After he had listened to them, he asked us what we wanted to get out of the pieces and what we had learned from us doing the project. I told him that it was interesting to learn about Station North and listen to the hidden voices behind the space. Especially with what had occurred in Baltimore it opened my eyes to the frustrations that people face within the city. After our class, a couple of us went to the Fine Arts building along with Marc in order to record the intro and bridge pieces. Carrie and I along with Professor King had worked separately on the intros and realized that in order to make sure we didn't miss anything important in our intro pieces we would need about 10 separate voices to tie it all together. We needed up having 10 people read the intros. After the 10 people helped, Carrie, Adam, me along with Professor King recorded the bridge. This was a comical experience as I created my own neighborhood in Station North. This class was definitely a lot more work than I had anticipated but it truly has been a wonderful experience.
Posted by Unknown at 2:58 PM No comments:

This past week in class was emotional and politically charged. The riots and destruction around the city of Baltimore made it difficult to focus on just about everything but what was going on in our city. In class on Tuesday, we briefly touched on the subject. It was clear that there was a lot of unanswered questions along with confusion as to why this was happening at our doorstep. I was particularly worried mainly because I work in Baltimore and wasn't really sure how long the situation was going to be going on. I think it was important for us especially in this class to discussion what was going on mainly because we had touched on a lot of subjects surrounding the 68 riots and it almost felt eerily similar. Besides talking about the on going problems we were assigned our last listening assignment. For this assignment I listened to Melissa Moore's recording. She is the founder and program facilitator for a new youth lead and design social justice organization called y lead. She spoke about how there is still a divide between the new group of kids that come in and the elders. She also gave an insight into how there are changes happening but how those changes are taking time. I really liked how she asked Neliah and Gaby what they thought should be different about Station North and incorporated them into the conversation. I'm anxiously waiting to see how the radio piece will look in the long end, but I'm also feeling really burned out since its the last full week of classes and finals are coming up.

This past week in class we made more progress on our Station North projects. On Tuesday Marc Steiner came into our class and we went over the progress that we have made for our projects. Along with going over our projects for our class, two other classes joined us. Each individual class is focusing on a specific part of Baltimore and during this class session not only did our individual section go over the two projects we are building but the other class showed us videos of what they have recorded . Our homework for the past week was to listen to specific recordings and pull out again common themes that we noticed from other recordings that we listened to. I was asked to listen to the first 22 minutes of Jonathan Green. From listening to his recording it was clear that he felt that Station North has gotten safer within the past few years. At the 9 minute marker, Green said that people no longer had to walk backwards in Station North implying that one can now walk the streets without looking over their shoulders every few minutes. In class on Thursday each individual listening group got together to discuss what we found to be common about the recordings. Towards the end of class the class collectively discussed the themes that we were seeing across the board. The voice group discussed after class how we wanted to break apart the new recordings that we had acquired. With less than 2 weeks left of the semester, I'm beginning to feel the pressures of making sure everything is completed properly and is given my best effort.
Posted by Unknown at 3:22 PM No comments: 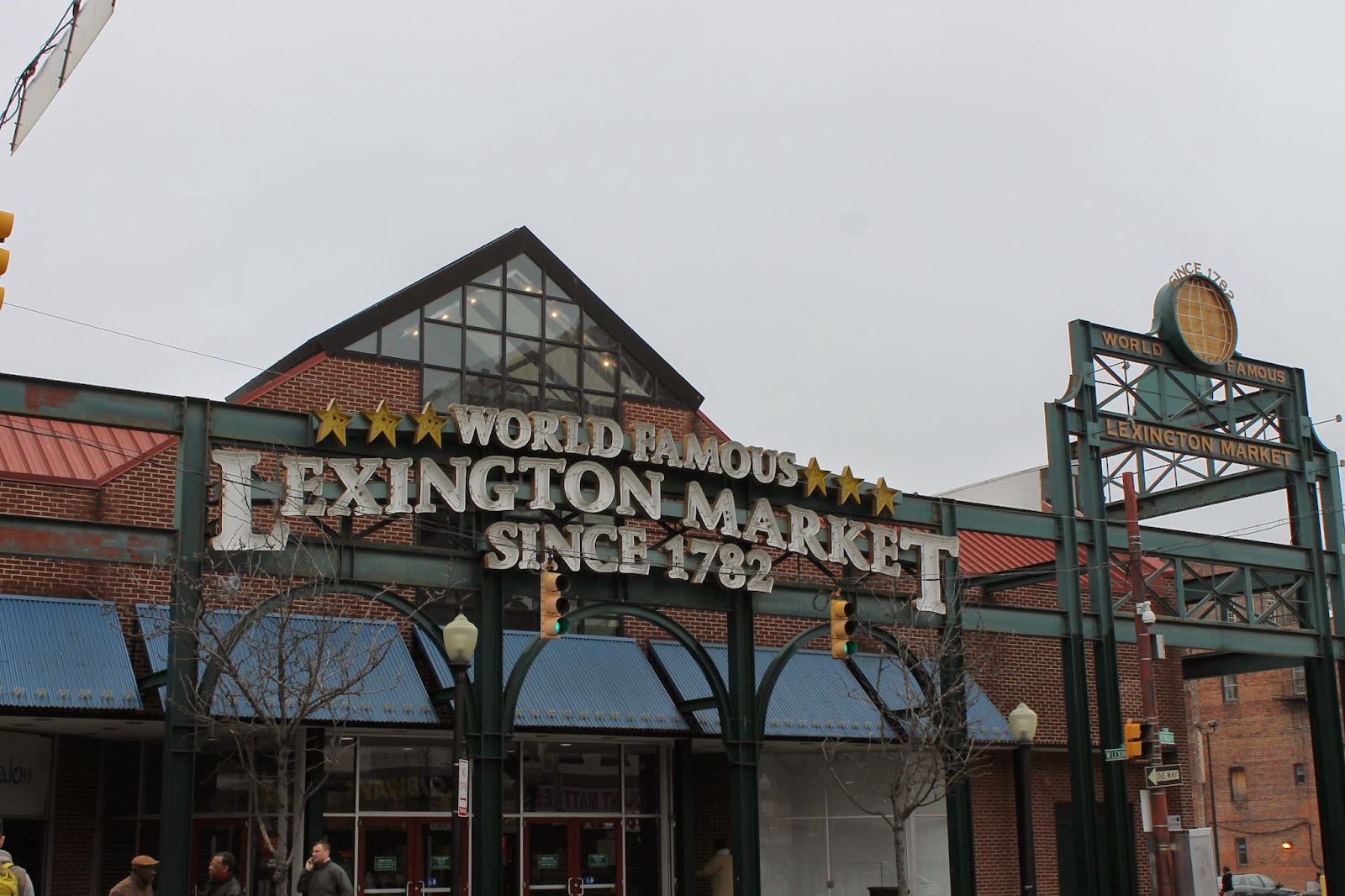 On April 9th a good porition of students along with our professor went to Baltimore specially Station North. We first went to Lexington Market where it was clear the amount diversity in such a small amount of space. Within the space in the market, I saw many different ethic eateries and heard many different dialogues floating around.

From Lexington Market we walked down to Station North making some minor stops along the way. On our way to Station North we stopped at library and ran into a guy who was selling fresh produce on a horse drawn carriage. 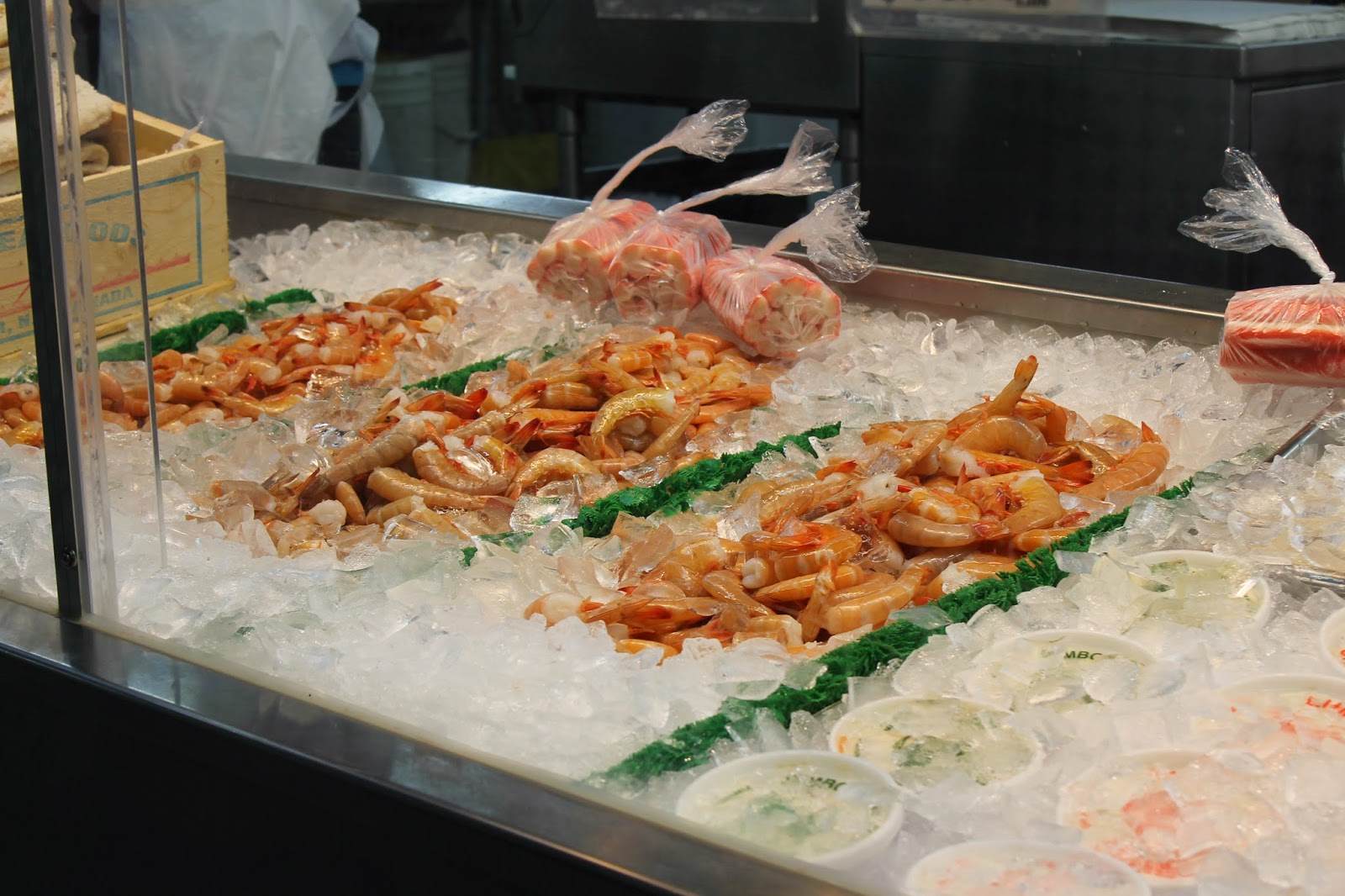 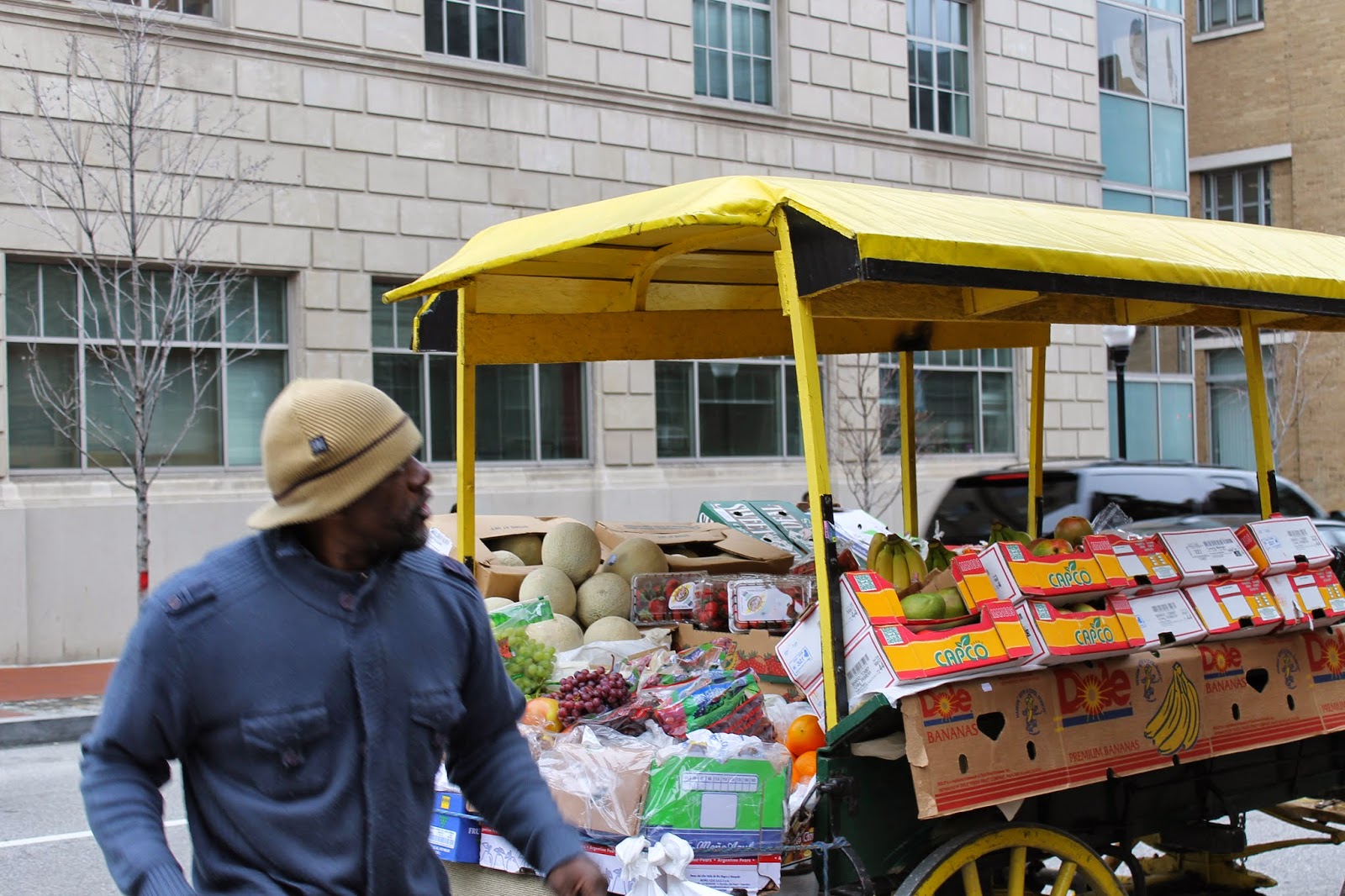 From the horse drawn carriage we finally made our way to our destination. At Station North the groups split and a couple of us walked around talking pictures. While walking around it was clear to see the things that Jasmine Simmons was talking about. Many people were sitting around on benches but they weren't going inside the stores.
Posted by Unknown at 3:41 PM No comments: